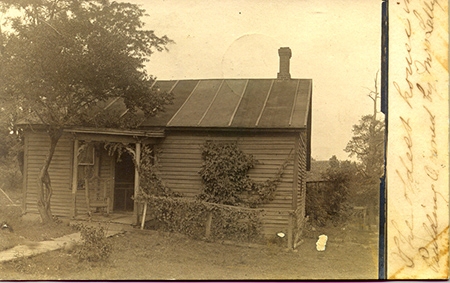 The Latty House c. 1900. From the PCCL Digital Collection. 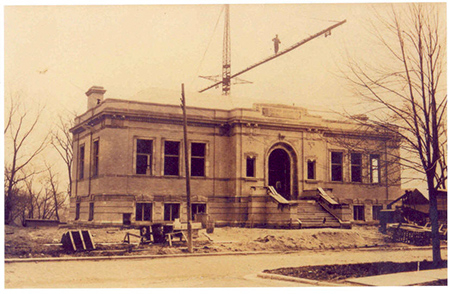 The library under construction, winter 1914-1915. Photo courtesy of Kim Sutton. From the PCCL Digital Collection.

In 1893, the Ladies Literary Society of Paulding assessed themselves $2.00 each to start a circulating library. Standard books were purchased and kept at the residence of the librarian, Mrs. Wm J. Wheeler. Books were offered to the public upon payment of 5 cents per volume per week. With this money more books were purchased. The library was in various places, in homes, above downtown stores and in a Main Street store front.

In 1903, the Federation of Literary Societies of Paulding met to enlist the public in obtaining a public library. From this meeting the Public Library Association was organized with 600 books on the shelves.

In 1913, Rebecca S. Latty, widow of Alexander Sankey Latty donated 4 lots on South Main Street and an extended piece of land that stretched to the center of Flat Rock Creek, including the section called “Old Tail Race.”   In the same year, through the efforts of Mr. C. H. Allen of Paulding, Mr. Andrew Carnegie gave $40, 000 to build a library. This was the first county library that Carnegie gave money to have built.

The new library was open for business on March 3, 1916 with 4000 books. The building was constructed of fireproof and slow burning materials, French gray pressed brick and Indiana Bedford stone with a green tile roof. Architects were Howard and Merriam of Columbus, Ohio. These architects also designed the Hayes Presidential Library in Fremont, Ohio.

The library was placed on the National Registry of Historic Places in 1985. In 2003 the library received an Ohio Bicentennial Historical marker in recognition of it being the first county library funded by the Andrew Carnegie Foundation.

The first librarian in 1916 was Miss Elle Louise Smith. Mrs. Susan Hill Pieper has been the director since 1997.

In 2009 the voters of Paulding County approved an operational levy for the first time in the library’s history. In 2014, voters renewed the library levy.

The Paulding County Carnegie Library system consists of the historic Carnegie library in Paulding, branch libraries in the villages of Antwerp, Oakwood and Payne; and county-wide bookmobile service which was established in 2011. The library employs a team of 19 who are dedicated to providing the highest quality library service.