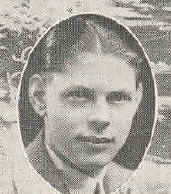 David Smith moved to Paulding County in 1921 and found himself a new student at Paulding High School.  Information from yearbooks provide a safe assumption that he was well-liked and appreciated for his talents.  But, as it is with teenagers, he endured normal ribbing.

Senior quote   “Bud argues that men were developed from monkeys.”

Class Prophecy  Roland Smith, a future artist.  His latest picture was a woodland scene, with nymphs dancing on the green.  The critics when writing it up referred to it as that famous masterpiece with Jersey cows grazing in the pastures. Poor Bud!  [Class of ’24 Prophecy made by classmate Esther Ream.]

Mr. Huffman:  “Was Aaron Burr a mean man?” Bud S.:  “Mean! Well, I should say he was.  I could take the little end of nothing whittled down to a point and punch the pith out of a hair, put in forty thousands souls like his and shake them up and they’d rattle.”

Class Calendar   December 13 — Snow.  Blanche better be more careful with her notes.  You too, Bud. December 19 — Bud claims he has poetic abilities too, and is some what of a long fellow (Longfellow) himself.

Year Book Ads   The Paulding National Bank was advertised as the oldest and largest bank in the county with capital and surplus of $126,000.

The Farmers Banking Company, East Side Square in Paulding paid 4% on savings.

Bill’s Candy Shop was a headquarters for “Young Folks”.  Their phone was 247.

[Library note:  To view the entire 1924 Echo, or other Paulding High School yearbooks, visit the library during normal operating hours.  Yearbooks are for “in house” use only.]

BIOGRAPHY David Smith was born in Decatur, Indiana, in 1906. His mother was a school teacher and a devout Methodist; his father was a telephone engineer and part-time inventor, who fostered in his son a reverence for machinery. After his family moved to Paulding, Ohio, in 1921, Smith developed an interest in art, taking a correspondence course in drawing under the auspices of the Cleveland Art School. Although he spent one year at Ohio University in Athens, Ohio, Smith felt that the studio art curriculum there did not offer the stimulation he sought, and he subsequently dropped out in the spring of 1925. During that summer, he worked as a welder and riveter at a Studebaker automobile factory, where his understanding and love for industrial materials and techniques took root. Much of this rudimentary training proved essential to Smith’s career as an artist.

Smith moved to New York in 1926 and enrolled in classes at the Art Students League, where he met Jan Matulka, a Czech abstractionist. Through Matulka, Smith became familiar with the work of Piet Mondrian, Wassily Kandinsky, and the cubists. By the early 1930s, Smith had begun to incorporate found objects such as shells, bones, wood, and wire into his paintings, adding depth and transforming them into sculptural reliefs. Soon thereafter he began constructing welded steel sculptures, and it is for these works that Smith is best known. Smith developed friendships with other avant-garde artists, including Willem de Kooning, Arshile Gorky, and John Graham. Graham, a painter and critic, introduced Smith to the welded sculptures of Julio Gonzáles and Pablo Picasso, which made a tremendous impression on the artist. By 1934 he had settled into a “studio” at Terminal Iron Works, a foundry in Brooklyn, where he constructed innovative and remarkably diverse sculpture from used machine parts, scrap metal, and found objects.

Throughout his career Smith’s largely abstract work evoked the figure. Often executed in series, his sculptures fully explored particular ideas about materials and composition. In 1965 David Smith’s career was cut short when he died in a tragic automobile accident at the age of fifty-nine on May 23, 1965 in Albany, New York. [Source:  National Gallery of Art, Washington, D.C.]

Life at Paulding High School David Smith was known as Roland D. Smith during his high school years in Paulding, Ohio.  His nicknames were “Bud” and “Tile Mill”.  Paulding County was once totally encompassed in the Great Black Swamp.  Farmers “drained” the swamp to produce some of the richest farmland.  Tile Mills dotted the county landscape. One can only speculate how he acquired his “nicknames”.

Roland was Vice-President of his class of 1924.  He was also the artist for the 1923 yearbook. Two of his early sketches were featured in the school yearbook.  He would have been about 17 years old when he sketched these early drawings. 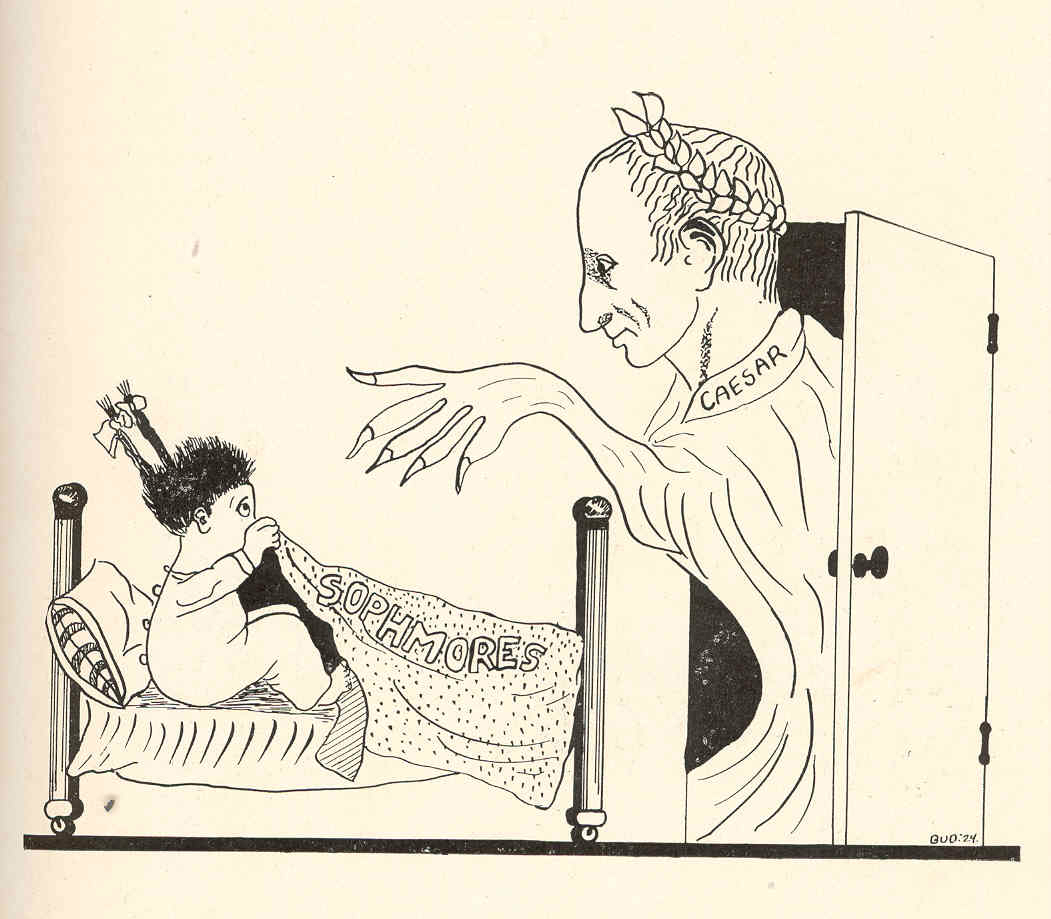 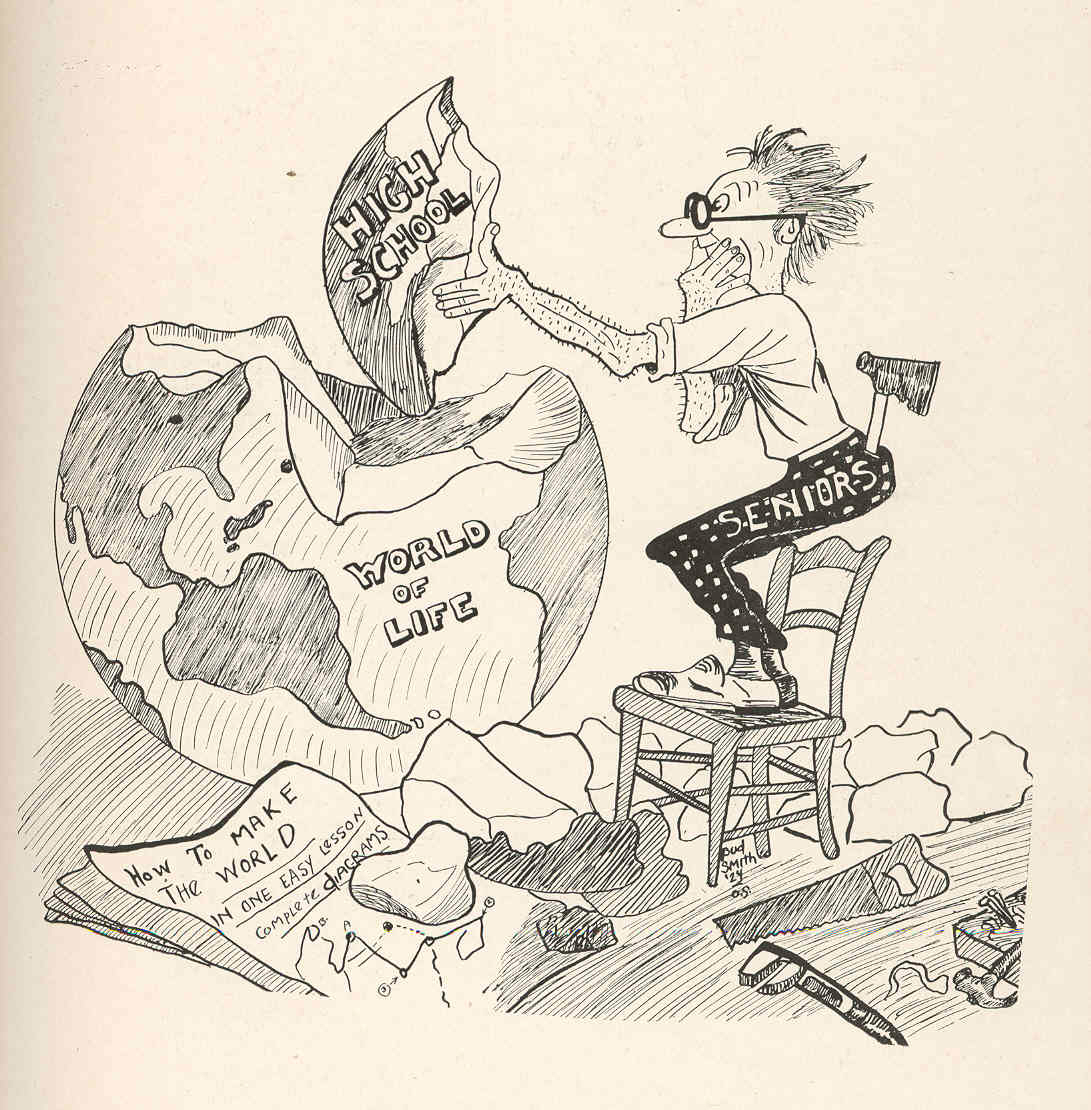 His Work David Smith has been described as one of the most influential and innovative American sculptors of the twentieth century. Originally trained as a painter, Smith turned to sculpting in the early 1930s.  His early work incorporated industrial objects in welded metalwork. In the 40s and 50s, Smith’s landscape-inspired sculptures were characterized by a delicate linear quality, reminiscent of drawing in metal and similar in feel to contemporary painting, and perhaps influenced by artists such as his good friend, Abstract Expressionist Jackson Pollack. In the 1960s his work had grown monumental in size, using geometric plates of highly polished steel.

View His Work Click here to view images of his work, courtesy of The National Gallery of Art, Washington D. C. 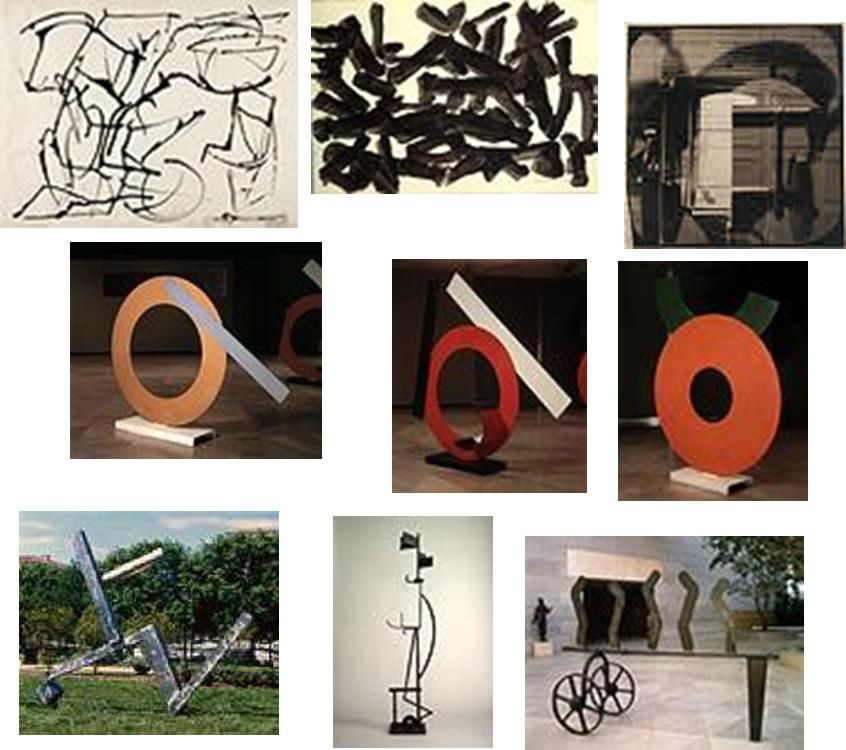